A Song of Silence 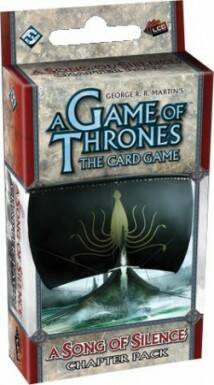 "A Game of Thrones LCG - A Song of Silence Chapter Pack

“We are the ironborn, and once we were conquerors. Our writ ran everywhere the sound of waves was heard. My brother would have you be content with the cold and dismal north, my niece with even less...I say we take it all! I say, we take Westeros.”

A Song of Silence is the fourth monthly installment of 60 fixed cards–3 copies each of 20 different cards–for the Brotherhood Without Banners expansion to A Game of Thrones: The Card Game. The never-before-seen cards in this expansion were designed to augment existing decks and add variety to the A Game of Thrones metagame."