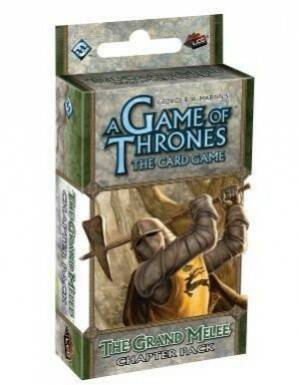 "The melee went on for three hours. Near forty men took part, freeriders and hedge knights and new-made squires in search of a reputation. They fought with blunted weapons in a chaos of mud and blood, small troops fighting together and then turning on each other as alliances formed and fractured, until only one man was left standing.

The Grand Melee is the second monthly installment of 60 fixed cards–3 copies each of 20 different cards–for the A Tale of Champions expansion to A Game of Thrones: The Card Game. The never-before-seen cards in this expansion are designed to augment existing decks and add variety to the A Game of Thrones experience.

Featuring new versions of favorite characters like Robert Baratheon, Varys, and Thoros of Myr, developed especially for the new environment of A Tale of Champions, as well as introducing brand-new cards like The Smalljon, Captain of the Iron Fleet, and In the Name of the King, The Grand Melee has plenty to interest A Game of Thrones players, both new and veteran.

An A Game of Thrones: The Card Game core set is required to play. Contains cards 21-40 of the A Tale of Champions series."